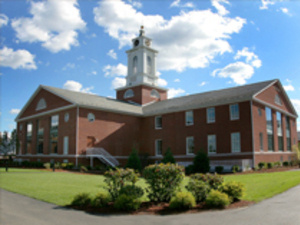 The Bentley Arena is an ice hockey arena on the campus of Bentley University in Waltham, Massachusetts. It is home to the Bentley Falcons men's ice hockey program, replacing the previous facility, the John A. Ryan Arena. The first hockey game was on February 16, 2018 with Bentley taking on Army West Point. The seating capacity for hockey games is 2,207.

The 76,000 square foot facility was designed by Architectural Resources Cambridge and built by Suffolk Construction. Ground broke on the Arena in the summer of 2016, and was completed in February 2018.

On May 7, the Arena was awarded an LEED Platinum rating, the highest possible rating for sustainability, according to the U.S. Green Building Council.

This event content is powered by Localist Event Calendar Software.

Login to interact with events, personalize your calendar, and get recommendations.