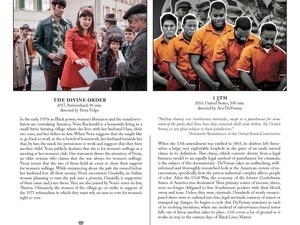 "Neither slavery nor involuntary servitude, except as a punishment for crime whereof the party shall have been duly convicted, shall exist within the United States, or any place subject to their jurisdiction." –Thirteenth Amendment of the United States Constitution

When the 13th amendment was ratified in 1865, its drafters left themselves a large, very exploitable loophole in the guise of an easily missed clause in its definition.  That clause, which converts slavery from a legal business model to an equally legal method of punishment for criminals, is the subject of this documentary.  DuVernay takes an unflinching, well-informed and thoroughly researched look at the American system of incarceration, specifically how the prison industrial complex affects people of color.  After the Civil War, the economy of the former Confederate States of America was decimated.  Their primary source of income, slaves, were no longer obligated to line Southerners’ pockets with their blood, sweat and tears.  Unless they were criminals.  Hundreds of newly emancipated slaves were re-enlisted into free, legal servitude courtesy of minor or trumped-up charges.  So begins a cycle that DuVernay examines in each of its evolving iterations; when one method of subservience-based terror falls out of favor, another takes its place.  13th covers a lot of ground as it works its way to the current days of Black Lives Matter.