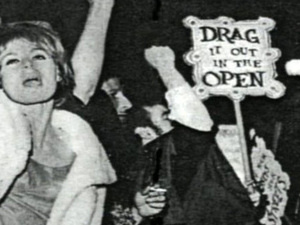 Join us for a night of documentary short films!

Part of a campaign initiated in 1989, this video is a component of Gran Fury’s plan to raise consciousness and advance medical and federal reform on AIDS policy. These ads ran on TV as a counterpart to controversial bus posters, which generated some intensely negative reactions. Using Benneton’s "United Colors" ad campaign to a decidedly different end, simple but powerful images and modern text deliver an enlighteningly direct message.

When San Francisco police raided a popular late-night hangout for transgendered people in the city’s impoverished Tenderloin district in 1966, the patrons unexpectedly fought back.  It was the first known instance of collective, queer resistance to police intimidation in United States history.  Screaming Queens tells the story of this little known uprising that helped launch a broader fight for human rights in America.