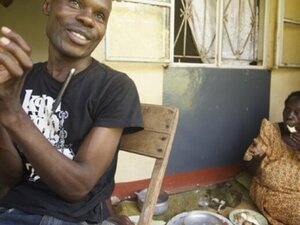 Dirty Laundry speculates upon the buried narratives of gender and sexuality in Chinese-Canadian history of the 19th Century, when Chinese communities were almost exclusively male. A story about a chance late-night encounter between a steward and a passenger on a train interweaves with documentary interviews with historians and writers and historical documents brought to life. The video poses nagging questions about the personal and political stakes in the writing of history and in our interpretations of the past.

In Uganda, a new bill threatens to make homosexuality punishable by death. David Kato - Uganda's first openly gay man - and his fellow activists work against the clock to defeat the legislation while combating vicious persecution in their daily lives. But no one, not even the filmmakers, is prepared for the brutal murder that shakes the movement to its core and sends shock waves around the world.