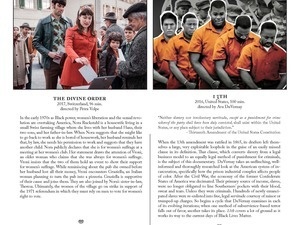 The Valente Center for Arts & Sciences is pleased to announce the fall 2020 international film series!

In the early 1970s as Black power, women's liberation and the sexual revolution are overtaking America, Nora Ruckstuhl is a housewife living in a small Swiss farming village where she lives with her husband Hans, their two sons, and her father-in-law.  When Nora suggests that she might like to go back to work as she is bored of housework, her husband reminds her that, by law, she needs his permission to work and suggests that they have another child.  Nora publicly declares that she is for women's suffrage at a meeting at her women's club.  Her statement draws the attention of Vroni, an older woman who claims that she was always for women's suffrage.  Vroni insists that the two of them hold an event to show their support for women's suffrage.  While reminiscing about the pub she owned before her husband lost all their money, Vroni encounters Graziella, an Italian woman planning to turn the pub into a pizzeria. Graziella is supportive of their cause and joins in with them. They are also joined by Nora's sister-in-law Theresa.  Ultimately, the women of the village go on strike in support of the 1971 referendum in which they must rely on men to vote for women’s right to vote.